Thankful for planes to watch while we wait… 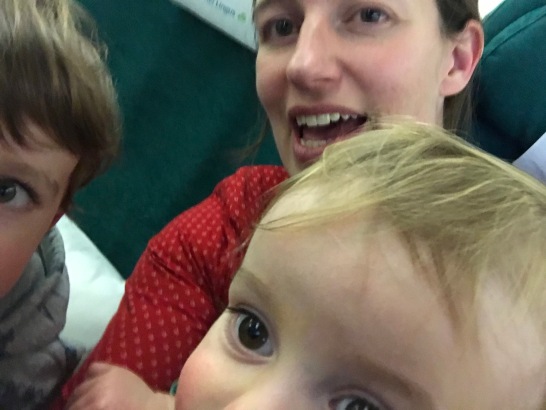 …and spare seats on a relatively empty plane

Monday evening last week, and we found ourselves unexpectedly at the airport waiting to catch a flight to England. Having spent the last couple of days eagerly anticipating Jonathan’s return from a UK business trip, we ended up being those on the plane rather than him.

He was refused entry back into the USA, and unfortunately his visa was withdrawn. This all became clear after five hours of intense questioning by an immigration officer, and having had his devices searched. Eventually, he was found innocent of fraudulent behaviour but had inadvertently gone beyond the parameters of his visa.

While we were uncertain that we would be able to return to the States after Christmas, pending our long-term visa application, we didn’t expect such an abrupt exit.

Jonathan rang from Dublin, where US immigration clearance happens, and within seven hours (thanks to amazing friends) we were at the airport racing to join him at home – desperate to be in the same place as each other while this nightmare unfolded.

In between the airport and our Dublin re-union was a small matter of an eight hour plane journey overnight. Literally flying solo with two little people. Journeying that began to feel a little extreme at the moment when Billy fell off the seat he’d been sleeping on. He erupted into screams, quickly joined by his brother who hadn’t fallen but was noisily empathising.  As I desperately tried to sooth them both while the rest of plane attempted to sleep, the air hostess hot footed it down the plane to see what was wrong, the couple next to us avoided all eye contact and a kind lady from a few rows up offered to take one of the crying boys.

We made it through the night and arrived in Dublin to do the final leg with Jonathan. Emotional and relieved to be together, while feeling like we’d been kicked in the stomach by all that had happened.

From feeling exuberant about the way business and life were going in the States, we suddenly found ourselves back in Blighty with no immediate place to live and reeling from the reality that we might never be able to go back.

As we’re thrown into a world of numerous uncertainties and unknowns, it has felt frustrating and overwhelming. So many decisions to be made, both from a business and a personal point of view. And so much of it out of our control.

But then we’ve been reminded that God is in control.

As Christians, the Bible tells us that we’re journeying through life rather than making our forever home here. It’s all about a perfect future rather than perfection now. We’re not promised ease or comfort along the way, but as we see Jesus on the cross, we know God loves us, that He’s got us, and that He won’t let us go, however extreme the journey feels.

The last week has felt like extreme journeying. But we know it’s journeying with our unchanging, loving God. It doesn’t mean it’s easy, but it means we’re standing on firm ground despite the shifting seas of our circumstances.

Currently adventuring in Illinois, America with my book-selling husband and two energetic little boys. Following Jesus, trying to parent well, reading books and running alongside my husband in every way possible. Co-host a podcast with my sister that chats through the Bible over a cup of tea called Two Sisters And A Cup of Tea View all posts by Felicity Carswell